Started by Kathy Bunker in 1992, Balloon Works saw a need for a qualified balloon decorator in the Tri-State area.  After four years of strong growth, John joined in 1996 and Balloon Works soon became Cincinnati’s premier balloon decorator. We soon expanded our area to include Dayton – Louisville – Lexington and southern Indiana.

Spirit Works started with a need to provide Prom favors and has grown into a full service Promotional Product distributor. If you can print on it, we can get it! (T-shirts – Jackets – golf shirts – pens – drinkware – lanyards – IT products, etc.)

In 2014 John Jr. joined the Balloon/Spirit Works family. With his addition, the future looks bright for Balloon Works!! 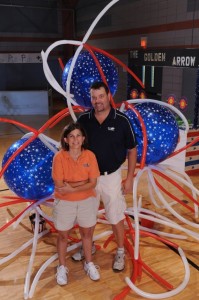 Article and photo in the Xavier Alumni magazine

Bright, bouncy balloons have always been the calling card of fun and games. But the world of color-shot latex is serious business for Kathy and John Bunker.

The couple—Kathy, a 1987 MED graduate, and John, a 1983 marketing graduate—are owners of Balloon Works and have created everything from an 80-foot octopus to dragons, menorahs and the Eiffel Tower out of balloons as small as five inches and as large as five feet and more.

“It’s a lot of fun, but also a lot of early hours,” Kathy says laughing, getting ready for a weekend with two birthday parties—one for an 80-year-old, the other for a 5-year-old. “Every day is a surprise. I can’t begin to guess anymore what people will ask for.”

John’s parents ran Celebrations, a downtown Cincinnati shop that dabbled in balloon decorating. Kathy pitched in and learned the creative side while in college. When their son was born, she turned back to balloons. John joined her in the late 1990s.

“What we have today is not like the lady who starts a business out of her garage with a bunch of balloons and a helium tank,” says Kathy.

Their projects take planning, advance staging and sometimes thousands of balloons. Their biggest project was the Millennium New Year’s Eve celebration at the downtown Convention Center in which they staged a balloon drop of 10,000 balloons.

Fortunately, they don’t have to blow up each balloon. There’s a machine for air and one for helium. But there’s no such machine for tying the knots on each one. 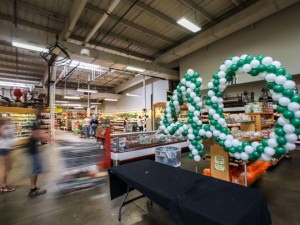